Have you ever heard any of the following trade finance terms and wonder their meanings: red clause, confirmed, standby, irrevocable.

These are the terms that are used to describe different types of letters of credit.

On this post, I will discuss the types of letters of credit.

Types of Letters of Credit

Traveler’s letters of credit, which were commonly used in eighteenth and nineteenth century, were the first financial instruments that contain very similar characteristics with the contemporary letters of credit.

Furthermore, in all of these years, the letters of credit provide a very flexible structure that has proven itself to meet the needs of different parties in international trade. 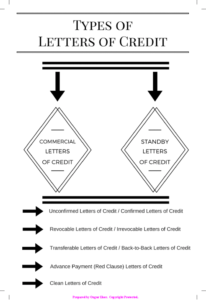 Commercial letters of credit are mainly used as a primary payment tool in international trade.

Majority of commercial letters of credit are issued subject to the latest version of UCP (Uniform Customs and Practice for Documentary Credits).

Commercial letters of credit are primary payment tools that need to be utilized when the beneficiary performs its duties and makes a complying presentation.

As an example, let us consider an exporter who ships the goods according to the sales contract and applies to the nominated bank for the payment.

If the nominated bank decides that the presentation is conforming to the terms and conditions of the credit and the UCP rules, then the exporter will be paid.

In standby letters of credit, the opposite scenario is valid.

A payment is made to the beneficiary of a standby letter of credit when the principal can’t fulfill his obligations.

As an example, let us consider a construction company which has been awarded with a tender.

If the construction company can’t fulfill its obligations under the project contract, the beneficiary of the standby letter of credit can apply to the nominated bank for the compensation.

The nominated bank considers only the terms and the conditions of the standby letter of credit and the rules governing the credit when deciding a complying presentation.

One point that needs to be stressed is that standby letters of credit have their own rules, which are called The International Standby Practices 1998 (ISP 98).

These rules are also published by ICC. However, a standby letter of credit can be issued subject to either the UCP or the ISP.

All credits issued subject to UCP 600 are irrevocable unless otherwise agreed between the parties.

Irrevocable Letters of Credit cannot be amended or cancelled without the agreement of the credit parties.

Unconfirmed irrevocable letters of credit cannot be modified without the written consent of both the issuing bank and the beneficiary.

Confirmed irrevocable letters of credit need also confirming bank’s written consent in order any modification or cancellation to be effective.

Unconfirmed Letters of Credit can be described as a letter of credit, which has not been guaranteed or confirmed by any bank other than the bank that opened it.

In these types of credits, the only bank that undertakes to honor a complying presentation is the issuing bank.

It would be easier to understand the confirmed letter of credit, if we start from the definition of the confirmation.

Confirmation means a definite undertaking of the confirming bank, in addition to that of the issuing bank, to honor or negotiate a complying presentation.

If a letter of credit’s payment undertaking is guaranteed by a second bank, in addition to the bank originally issuing the credit this kind of credit is called confirmed letter of credit.

The confirming bank agrees to pay or accept drafts against the credit even if the issuer refuses to do so. Only irrevocable credits can be confirmed.

Below, you can find two different definitions of a clean letter of credit.

A letter of credit payable upon presentation of the draft, without any supporting document being required.(www.businessdictionary.com)

L/C that does not require any document other than a written demand for payment by its beneficiary. In effect, a draft. (www.intracen.org)

Clean letters of credit are issued only by the request of the highest credit standing companies.

It is suitable for variety of commercial situations where no movement of goods is expected. Historically these types of credits have been used in traveler’s letters of credit.

Today direct pay standby letter of credit can be given as an example of clean letters of credit.

There are also some other form of letters of credits which deserve special attention.

We will discuss them by one by more in detail, however; you can find short description of each of them below.

Transferable letter of credit is a documentary credit that is issued with the option to allow a trader to transfer its rights and obligations to a new supplier.

Letter of credit that carries a provision (traditionally written or typed in red ink) which allows a seller to draw up to a fixed sum from the advising or paying-bank, in advance of the shipment or before presenting the prescribed documents.

What is Irrevocable Letter of Credit? Definition and Application