What Does Reimbursement Mean?

Reimbursement is defined as a compensation paid to someone for an expense.

In order to be reimbursed by another person or organisation, first of all you have to make some expenses, then you will be qualified for a reimbursement.

The same logic apply to the reimbursement as a trade finance term.

A confirming bank or a nominated bank first honors or negotiates against a complying presentation under a letter of credit and then they will be reimbursed by the reimbursing banks in accordance with the issuing banks authorization.

Reimbursing bank is the bank that, at the request of the issuing bank, is authorized to pay, or accept and pay time draft under a documentary credit in accordance with UCP 600 article 13 or if incorporated, the ICC uniform Rules for Bank-to-Bank Reimbursements under Documentary Credits (URR 725). (1)

What is the Function of a Reimbursing Bank Under a Letter of Credit?

There are two possible reasons that makes a reimbursing bank necessary under a documentary credit transaction.

First reason may be that the confirming bank does not trust the issuing bank in terms of risk issues and demands more security. In this situation presence of the reimbursing bank is a requirement for the confirmation.

Without receiving a reimbursement undertaking from the reimbursing bank, the confirming bank may elect not to add its confirmation to the credit.

Note: Please keep in mind that confirmation process is a commercial decision and no bank is forced to add its confirmation to any letter of credit. Please read my article Confirmation and Confirmed Letter of Credit for more detail.

Second reason could be that the issuing bank and nominated bank (in case confirmed letter of credit confirming bank) do not have an account relationship, as a result they may be requiring a third bank’s service for the settlement.

What are the Rules Covering Bank-to-Bank Reimbursements Under Letters of Credit?

There are two options for the reimbursement rules.

Reimbursements must be governed either by URR 725 or UCP 600 article 13 for the letters of credit which are opened according to latest documentary credit rules.

Note: Additionally the reimbursement authorization should expressly indicate that it is subject to URR 725 – The Uniform Rules for Bank-to-Bank Reimbursements under Documentary Credits.

Some important definitions from URR 725 – The Uniform Rules for Bank-to-Bank Reimbursements under Documentary Credits:

Reimbursement Transaction Under a Letter of Credit: 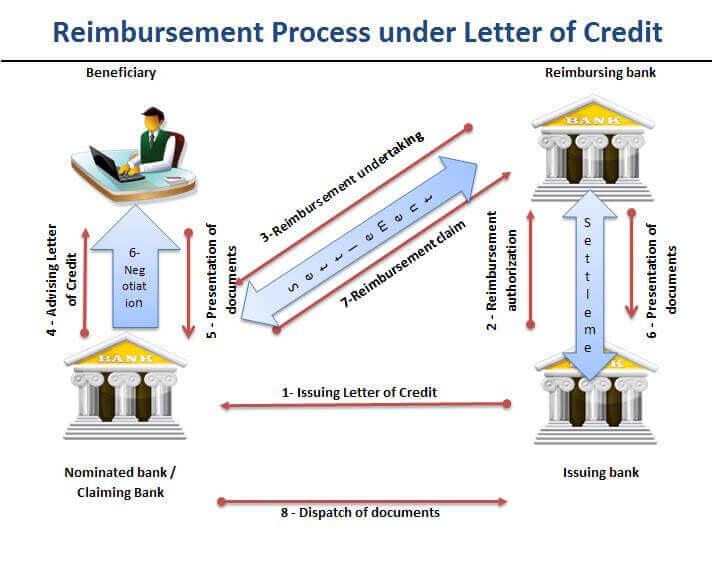