What are the risks of a document which is to be issued, signed or countersigned by the applicant in a letter of credit transaction?

In some occasions importers would like to divide letter of credit payments into two or three parts in order to make sure that they will be receiving ordered goods in proper condition.

We call it mixed payments under letters of credit.

On the below example I will be demonstrating a possible scenario as follows:

An exporter and importer have signed a sale contract which is stating that the payment will be done by an irrevocable letter of credit for 100% of the contract amount. 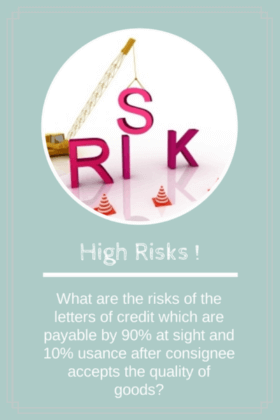 Letters of credit issued with similar conditions as stated above may bring some uncertainties to the exporters, mainly because of the fact that they may not be able to secure their balance payment, which is payable after the acceptance of the goods by the importers.

Exporters may find these clauses confusing and risky. They may want to know what would be their risks under these kinds of letters of credit?

In order to answer this question properly once again we should check ICC’s view.

ICC banking commission explains their stance in this regard at the latest version of the International Standard Banking Practices publication which is known as ISBP 745.

ISBP 745 states that “a credit or any amendment thereto should not require presentation of a document that is to be issued, signed or countersigned by the applicant.”

On the above example 10% of the balance payment requires presentation of a document issued and signed by the applicant, which is openly against the ICC’s stance.

Beneficiaries should remove such clauses from the letters of credit via amendments. If they fail to do so, they may increase their non-payment risk of the balanced payment.

How to Determine Date of Shipment on a Bill of Lading?