A very good example of a multimodal transportation is that containers loaded in continental Europe travel by train to Rotterdam, then ship on a vessel to Dar Es Salaam, then are delivered inland in Tanzania by truck. (Source: UNDP Shipping and Incoterms Practice Guide, Page: 6)

Multimodal bill of lading is a transport document that is evidencing more than one mode of transport, one of which is typically by sea shipment, although it is not required.

MMBL (Multimodal Bill of Lading) or MMTD (Multimodal Transport Document) are the most frequently used abbreviations. 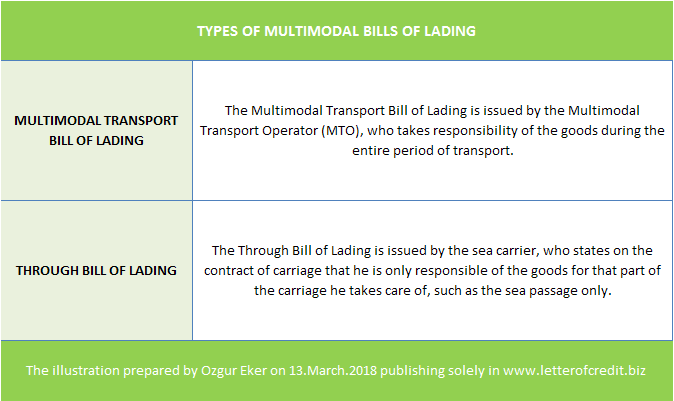 Multimodal Transport Bills of Lading: These types of multimodal bills of lading are issued by a multimodal transport operator and mostly printed on FIATA (International Federation of Freight Forwarders Associations) standard pre-printed form.

The Multimodal Transport Bill of Lading is issued by the Multimodal Transport Operator (MTO) (shipping lines, freight forwarders, NVOCC Operators) who takes responsibility of the goods (e.g. shortages, losses, damages) during the entire period of transport, thus not only for the sea passage but also for the other transport modes as well.

The Through Bill of Lading is issued by the sea carrier but the carrier states on the contract of carriage that he is only responsible of the goods for that part of the carriage he takes care of, such as the sea passage only. (Source : www.maritimeknowhow.com )

How to Use Multimodal Bill of Lading in Letters of Credit Transactions:

The rules related to the multimodal bill of lading can be found under article 19 of UCP 600.

You can find a multimodal bill of lading example below, that is evidencing a soybean shipment from USA to Japan. 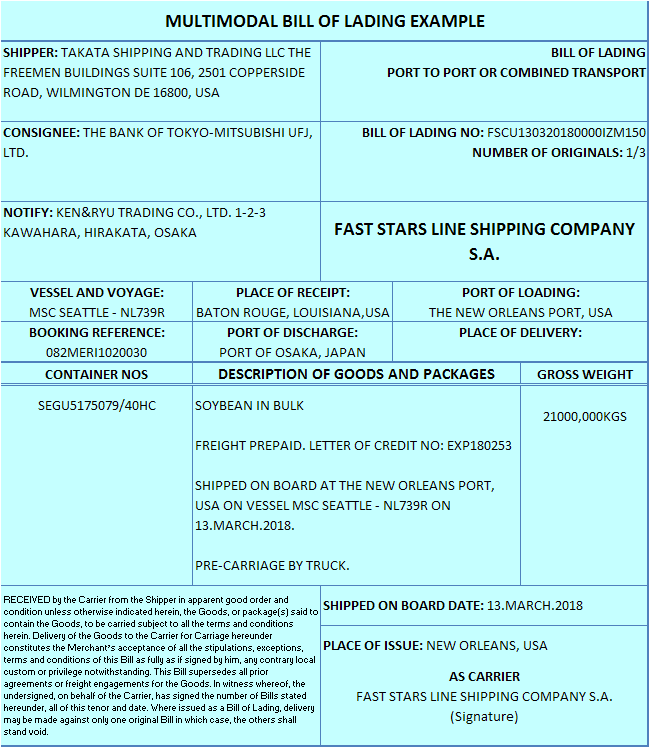 Above multimodal bill of lading evidencing both road and sea transportation. It is most probably issued by a freight forwarder, because of the fact that the transport document has been signed “As CARRIER”.

How to Determine Date of Shipment on a Charter Party Bill...