On this page, I will try to explain “Bill of Exchange” and its applications in letters of credit.

Banks mention “Bill of Exchange” as “Draft” in some occasions.

Bill of exchange can be used as a supporting financial document in cash against documents and letters of credit payments.

Bill of exchange is one of the most hard-to-understand concepts in trade finance terms.

May be it is why some professionals find it unnecessary and demand its removal from the letters of credit, altogether.

Definition: According to UK’s Bill of Exchange Act (1882), the bill of exchange defined as an unconditional order in writing, addressed by one person to another, signed by the person giving it (drawer), requiring the person to whom it is addressed (drawee) to pay on demand or at a fixed or determinable future time a sum certain in money to or to the order of a specified person, or to bearer (payee).

Parties to Bill of Exchange:

There are 3 parties involved in a typical bill of exchange transaction.

Bill of exchange transaction process may vary along with the selected payment method.

Below image illustrates a very basic bill of exchange process under an unconfirmed letter of credit transaction. 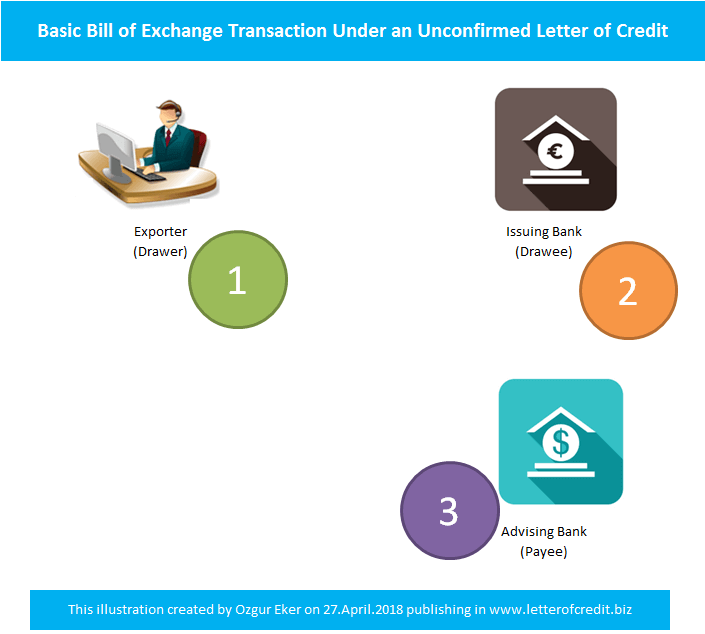 Important Note: The drawee and payee may change from one letter of credit to another. Especially, under confirmed letters of credit the drawee is the confirming bank instead of the issuing bank.

How to Use Bill of Exchange in Letters of Credit Transactions: