A proforma invoice is a commercial document, usually prepared during the negotiation stage of the order.

A proforma invoice is a quote in an invoice format that may be required by the buyer to apply for an import license, contract for pre-shipment inspection, open a letter of credit or arrange for transfer of currency. (Source:Export Information and Documentation: A Guide for New Exporters Page: 16)

A commercial invoice is also a commercial document, but unlike the proforma invoice, it generally prepared during the shipment stage.

A commercial invoice is a required document for the export and import clearance process. It is sometimes used for foreign exchange purposes.

In the buyer’s country, it is the document that is used by their custom officials to assess import duties and taxes. (Source:Export Information and Documentation: A Guide for New Exporters Page: 18)

The letter of credit rules and international standard banking practices do not allow presentation of a “provisional”, “proforma”, “performa” invoice instead of a commercial invoice.

If the beneficiary presents a proforma invoice instead of a commercial invoice, the issuing bank raise a discrepancy, which is known as “Proforma Invoice Presented Instead of a Commercial Invoice”.

Discrepancy Example: Proforma Invoice Presented Instead of a Commercial Invoice

Field 45A: Description of Goods and or Services: Electrical Equipment as per proforma invoice no 40000 of 2014/04/10 mention to be indicated on the definitive invoice.

Field 46A: Documents Required: Signed commercial invoice in six copies issued by beneficiary, original of which must be certified by the chamber of commerce and legalized by the consulate of Jordan, if available at beneficiary’s location, if not, legalization should be effected by any other Arab Consulate.

The beneficiary presented a proforma invoice as shown on the below picture. 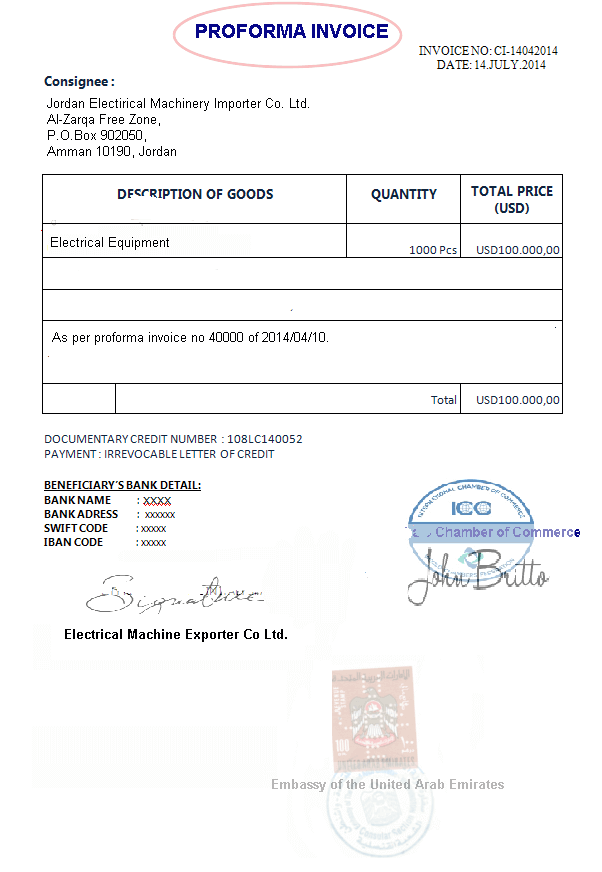 Discrepancy: Proforma invoice has been presented instead of a commercial invoice.

Reason for Discrepancy: Letter of credit rules prohibit presentation of a proforma invoice instead of a commercial invoice.

When a letter of credit requires presentation of an “invoice” without further description, this will be satisfied by the presentation of any type of invoice (commercial invoice, customs invoice, tax invoice, final invoice, consular invoice, etc.). However, an invoice is not to be identified as “provisional”, “proforma” or the like.

Port of Loading Different Than Letter of Credit Discrepancy