The importer and exporter should determine, when signing the sales contract, to allow or prohibit partial shipments.

Partial shipment can be defined as shipping the goods not whole at once, but in more than one smaller shipments.

Partial shipments total may be less than the total contract amount.

In order to understand, whether or not partial shipments are allowed under a documentary credit, you need to look at “Field 43P: Partial Shipments” within the swift message body.

Sample Partial Shipment Discrepancy on a Bill of Lading under a Letter of Credit:

Field 45-A: Description of Goods: 24 Pcs of Food Sorting Machinery

Field 46A: Documents Required: Full set of original bill of lading laden on board marked freight collect made out to the order of HSBC Bank, USA notify applicant.

The beneficiary presented two set of documents containing two bills of lading among other documents with the following data: 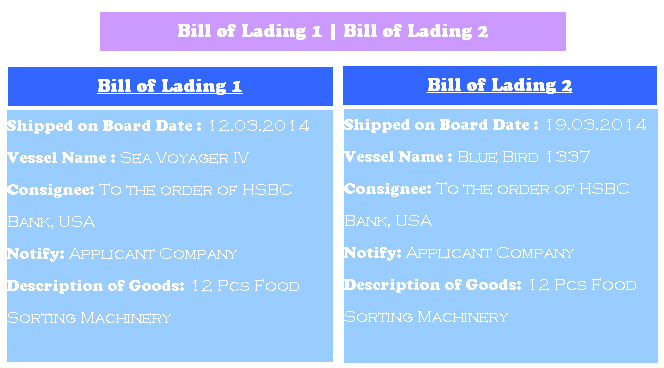 Reason for Discrepancy: The beneficiary presented two sets of documents within the same presentation. The issuing bank determined that partial shipment has been effected on contrary to the letter of credit terms, because goods have been dispatched with two different vessels.

How to Prevent a Partial Shipment Discrepancy?

Carrier Not Identified and Bill of Lading Not Signed As Per...

Certificate of Origin not Issued by the Chamber of Commerce Discrepancy