If you want to understand, which type of bill of lading you have in your hand, please simply look at the right bottom or right top corner of the bill of lading.

You will (most probably) see a small rectangular, which contains an abstract of contract of carriage.

Please keep in mind that full details of the terms and conditions of the carriage will be placed on the back side of the bill of lading, of course, if it is not a blank-back or short form bill of lading.

Received for shipment bill of lading confirms that the carrier has taken charge of the goods.

Because of the fact that the name of the actual vessel is not determined at the time of the issuance of the received for shipment bill of lading, the carrier may define the vessel as an “intended vessel“.

Unfortunately, the letter of credit rules accept intended vessel notation as a discrepancy in the absence of an on board notation.

The only way to get your payment from the issuing bank under letter of credit transaction is to make a discrepancy free presentation. So, you must understand what an intended vessel discrepancy is.

Why Intended Vessel Clause Inserted on the Bill of Lading?

The actual vessel may not be determined when the carrier receives the goods from the shipper, especially in “Received for shipment” types of bills of lading.

It has therefore become common practice to indicate the name of an intended vessel in the bill of lading, thus making it clear that a different vessel finally be selected.

Therefore, the bill of lading, as originally issued, does not indicate that the goods have been shipped on board a named vessel. (Gary Collyer, The Guide to Documentary Credits, 3rd Revision, Page: 205)

What the Letter of Credit Rules Say About Intended Vessel?

According to UCP 600 “If the bill of lading contains the indication “intended vessel” or similar qualification in relation to the name of the vessel, an on board notation indicating the date of shipment and the name of the actual vessel is required.”

Absence of such an on board notation will make the bill of lading discrepant.

Example intended vessel discrepancy on a bill of lading under a letter of credit:

A letter of credit has been issued in SWIFT format, subject to UCP latest version, with the following details:

Field 46A: Documents Required: Full set of original bill of lading shipped on board marked freight collect made out to the order of Bank Millennium S.A, Poland notify applicant.

The beneficiary presented a bill of lading among other documents as shown on the below picture: 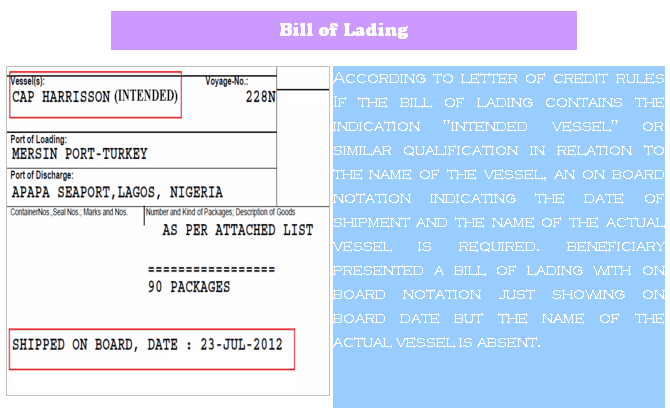 Carrier Not Identified and Bill of Lading Not Signed As Per...