Amer from Ajman (United Arab Emirates (UAE)) asks this question. I would like to thank him once again for this great question.

Question: I have an L/C as follows:

I shipped the goods in 5 container as below. Which means that I had submit 2 B/L s for the same L/C. Please keep in mind that all other details will be the same.

Answer: First of all, we need to determine that the shipment, which is effected as indicated above, could be accepted as a partial shipment or not. 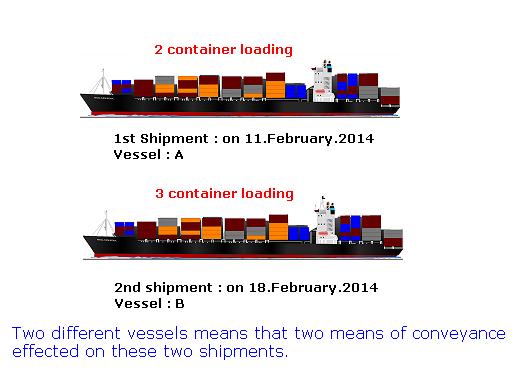 As indicated in UCP 600 if more than one means of conveyance has been affected under one letter of credit presentation this will be regarded as a partial shipment.

After determining that partial shipment has been effected on this presentation, we need to look at the letter of credit text in order to understand, whether partial shipment was allowed or not.

Again, we can see from Amer’s information that partial shipment is allowed under respected documentary credit.

Conclusion: Partial shipment has been effected on these shipments and letter of credit allows partial shipments. As a result, beneficiary can submit two sets of bills of lading under the same presentation without any problem.

Means of Conveyance and Mode of Transport

What are the Consequences of not Allowing Partial Shipments?