Bill of lading is a transport document covering the carriage of goods by sea.

On this port I will explain how to complete a bill of lading as it is explained under letters of credit rules UCP 600 article 20.

Step 1 : Analyzing the Letter of Credit:

All documents must be issued according to the conditions of the letter of credit. Bill of lading is not an exception.

As a result a beneficiary who would like to submit a discrepancy free bill of lading must analyze the letter of credit at first instance.

I have already explained how to check a letter of credit as an exporter. This post will be focused on a bill of lading.

Below fields are directly related to the bill of lading and each one must be reviewed carefully.

a. A bill of lading, however named, must appear to:

i. indicate the name of the carrier and be signed by:

ii. indicate that the goods have been shipped on board a named vessel at the port of loading stated in the credit by:

– Pre-printed wording, or
– An on board notation indicating the date on which the goods have been shipped on board.

If the bill of lading contains the indication “intended vessel” or similar qualification in relation to the name of the vessel, an on board notation indicating the date of shipment and the name of the actual vessel is required.

iii. indicate shipment from the port of loading to the port of discharge stated in the credit.

vi. contain no indication that it is subject to a charter party.

b. For the purpose of this article, transhipment means unloading from one vessel and reloading to another vessel during the carriage from the port of loading to the port of discharge stated in the credit.
c.

i. A bill of lading may indicate that the goods will or may be transhipped provided that the entire carriage is covered by one and the same bill of lading.

ii. A bill of lading indicating that transhipment will or may take place is acceptable, even if the credit prohibits transhipment, if the goods have been shipped in a container, trailer or LASH barge as evidenced by the bill of lading.

d. Clauses in a bill of lading stating that the carrier reserves the right to tranship will be disregarded.

Step 3 : Make Sure That Data on Bill of Lading is not Conflicting with Data on Other Documents:

Data in a document, when read in context with the credit, the document itself and international standard banking practice, need not be identical to, but must not conflict with, data in that document, any other stipulated document or the credit.

For example description of goods, gross weight, net weight, product classification codes, shipping marks, packaging, quantity of goods etc. as stated on the bill of lading must not conflict with data in any other stipulated document.

Example: Letter of Credit and Presented Bills of Lading

F45A: Description of Goods and/or Services

ARTICLE 3- FULL SET OF SHIPPED (ON BOARD) MARINE BILLS OF LADING IN 3/3 ORIGINALS ISSUED BY SHIPPING CO’S ON IT’S LETTER HEAD FORMAT ISSUED TO THE ORDER OF THE HOUSING BANK FOR TRADE AND FINANCE, BAHRAIN BRANCH SHOWING FREIGHT PREPAID AND MUST INDICATE ONLY THE APPLICANT AS A NOTIFY PARTY AND MUST INDICATE NAME AND ADDRESS OF THE SHIPPING COMPANY’S AGENT IN BAHRAIN.

THE MARINE B/L MUST CLEARLY INDICATE THE NAME OF THE CARRIER AND CLEARLY STATES ITS FUNCTION/QUALITY IN THE FOLLOWING STRICT MANNER: ”THE CARRIER” AND NOT ”AS CARRIER” AND BILL OF LADING MUST SHOW PACKING OF THE GOODS IN SEAWORTHY PACKING AS PER ISO STANDARD.

B/L MUST SHOW THAT GOODS SHIPPED IN CONTAINERS.

ALL DOCUMENTS MUST BE DATED AND INDICATE THIS L/C NUMBER AND THE HOUSING BANK
FOR TRADE AND FINANCE,BAHRAIN BR. NAME AND ISSUANCE DATE.

B/L MUST SHOW THE CONTAINER(S) AND SEAL(S) NUMBER(S) ALWAYS WHENEVER SHIPMENT
EFFECTED BY CONTAINER(S).

B/L ISSUED AND/OR SIGNED BY FREIGHT FORWARDER IS NOT ACCEPTABLE.

SHORT FORM B/L IS NOT ACCEPTABLE.

SHIPPER OR CONSIGNOR OF THE GOODS INDICATED ON ANY DOCUMENTS MUST BE THE
BENEFICIARY OF THE CREDIT.

ALL REQUIRED DOCUMENTS MUST BE ISSUED IN ENGLISH LANGUAGE.

DOCUMENTS APPEARING DATE OF ISSUANCE PRIOR TO THAT OF THIS CREDIT ARE NOT
ACCEPTABLE. 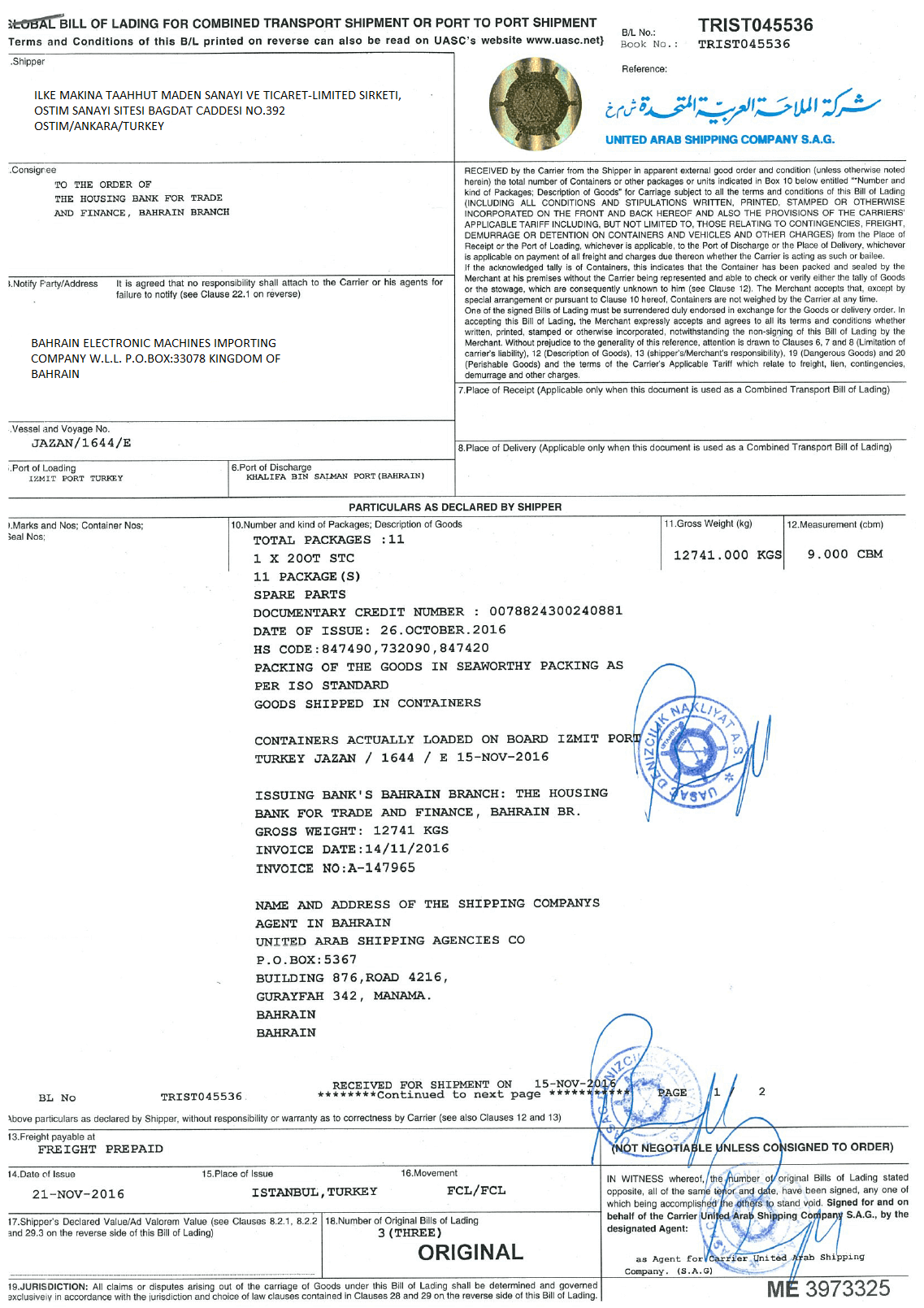 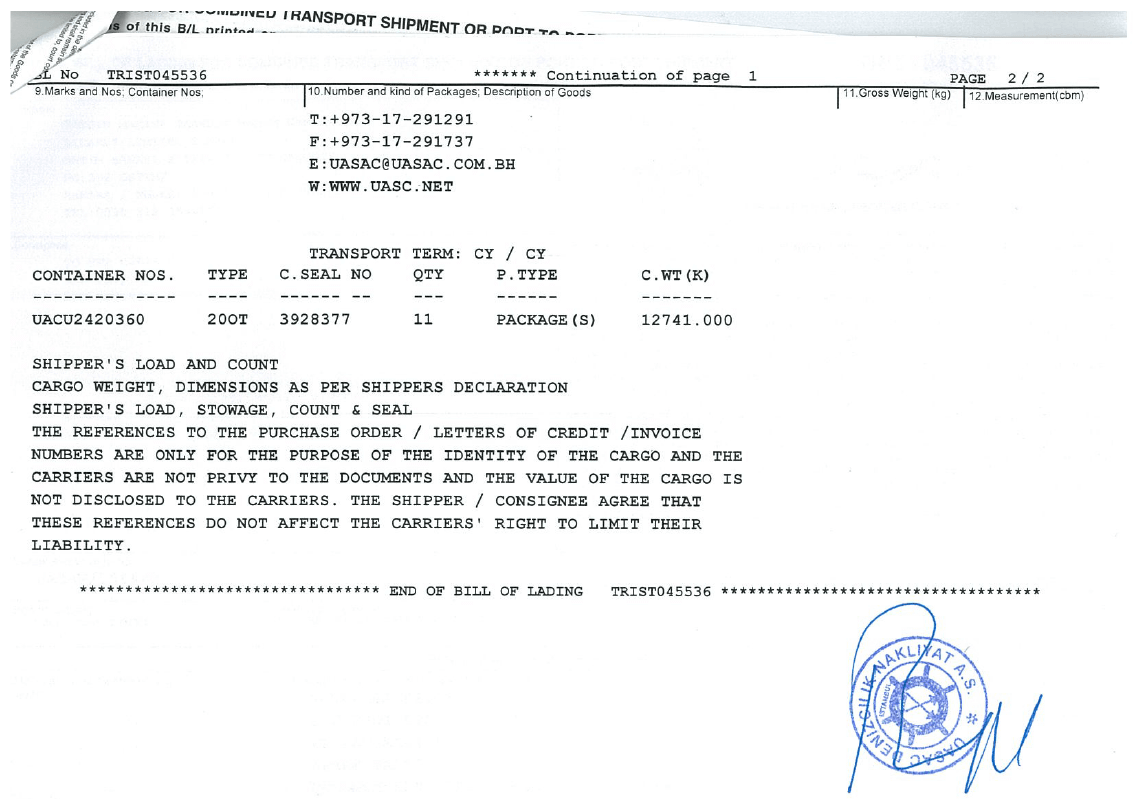 What Happens if Letter of Credit is Silent in Regards to...