A commercial invoice is a trade document, which is generally prepared during the shipment stage.

A commercial invoice is a required document for the export and import clearance process. It is sometimes used for foreign exchange purposes.

In the buyer’s country, it is the document that is used by their custom officials to assess import duties and taxes. (Source: Export Information and Documentation: A Guide for New Exporters Page: 18)

A commercial invoice must appear to have been issued by the beneficiary or, in the case of a transferred credit, the second beneficiary.

A commercial invoice must appear to have been made out in the name of the applicant.

Discrepancy Example: Commercial Invoice Not Issued by the Beneficiary

Field 45A: Description of Goods and or Services: Supply of 1 pcs erosion and tool grinding machine as per Proforma Invoice No 120 dated 12.03.2014. Delivery Terms: CFR Apapa Seaport Lagos Incoterms 2010.

Field 47A: Additional Conditions: Third party documents are acceptable which means that all documents, excluding drafts and invoices, may be issued by a party other than the beneficiary.

The beneficiary presented a commercial invoice as shown on the below picture. 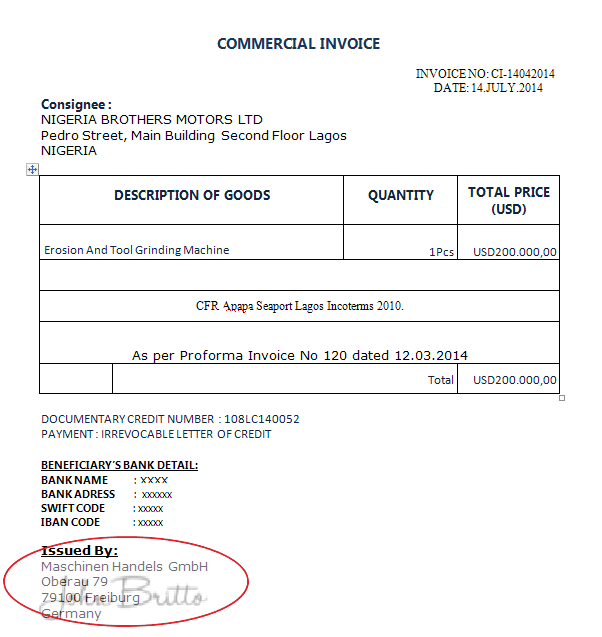 Discrepancy: Invoice should have issued by “Himmel Konig Sondermaschinen GmbH”, but it is actually issued by “Maschinen Handels GmbH” .

The additional condition, which is included in field 47-A, would have no effect on determination of the discrepancy, because the draft and the commercial invoice have been excluded from the scope of this clause.