Definition of Irrevocability Concept and Its Effects on Cancellation of Letters of Credit:

According to letter of credit rules, a credit can neither be amended nor cancelled without the agreement of the issuing bank, the confirming bank, if any, and the beneficiary.

Letter of credit is a conditional payment method, which means that the payment can be made only against a complying presentation, but the terms and conditions of the credit cannot be amended or else cannot be cancelled by the issuing bank without the consent of the beneficiary.

As a result issuing banks cannot cancel letters of credit by themselves alone.

In order to cancel a letter of credit, an issuing bank has to receive a written declaration from the beneficiary certifying that the letter of credit will not be utilized.

If the letter of credit has been confirmed by another bank, the confirming bank’s written declaration should also be received before the cancellation. 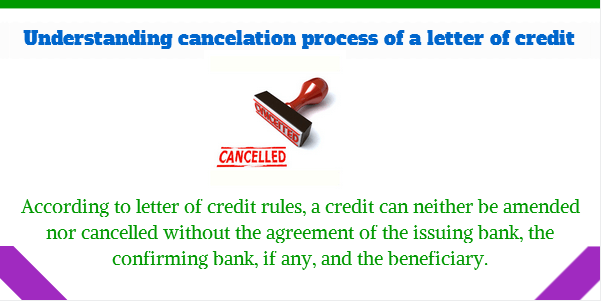 How to Cancel a Letter of Credit?

There are two ways to cancel a letter of credit.

Actually the first scenario should be treated as a “termination” rather than a “cancellation”.

Cancellation of a letter of credit which is not utilized by the beneficiary within the validity period:

Every letter of credit must have a expiry date and place.

This type of cancellation should be called as termination of letter of credit by the beneficiary.

What are the factors that may have forced the beneficiary to terminate the letter of credit?

There would be couple of factors that leads to termination of an L/C. Below you can find some reasons of termination that I can think of.

As explained above an irrevocable letter of credit cannot be cancelled without the written consent of the beneficiary and the confirming bank, if any.

As a result, a letter of credit cancellation process should be started with the beneficiary’s written declaration.

Case Study : Can the Issuing Bank Cancel the L/C by Himself on the Grounds That Bad Quality of Goods?

Summary: The letter of credit was issued by National Import Bank in Saudi Arabia for USD 5,500,000 allowing partial shipments.

It was planned under the sales contract that the goods will be loaded via 5 partial shipments of each equals to USD 1,100,000.

Additionally the nominated bank did not make any payments to the beneficiary. Its role was rather an advising bank’s role under this transaction.

The beneficiary made the 1st shipment and received the payment from the issuing bank.

On the 2nd shipment beneficiary did not get any payment from the issuing bank, although there was no advice of refusal received.

Later on the beneficiary received following message from the issuing bank via the nominated bank ‘Goods are defective, as stated by the buyer, the said L/C is cancelled.’

40A : Form of Documentary Credit
IRREVOCABLE

45A : Description of Goods &/or Services
5 SETS OF WIND TURBINES

Answer: The letter of credit cannot be cancelled by the issuing bank by himself on the grounds that bad quality of goods. Only a court order could stop issuing bank to pay for the complying documents.

What happens if court stops payment of an irrevocable, confirmed letter of credit which is payable 90 days after sight due to low quality of goods?

Which is the Best Cargo Insurance Type That Should be Selected...